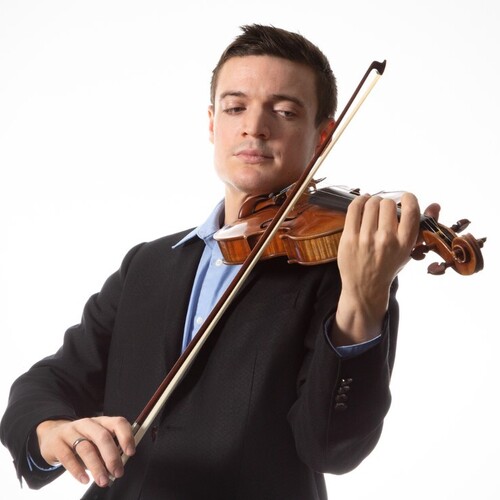 “Our Ypsilanti Symphony Orchestra can’t wait to open the season with this terrific concert. We are thrilled to be back at Lincoln High School for another year of bringing a great variety of orchestral music to music lovers of all ages,” said Music Director Adam C. Riccinto. “YSO is honored to be sharing the stage with one of today’s finest violinists, Eliot Heaton. His performance of the Tchaikovsky Violin Concerto—one of great masterworks for violin—is not to be missed!”

Eliot has appeared as a soloist with a number of orchestras throughout the Midwest, performing a wide variety of concertos from the nineteenth, twentieth, and twenty-first centuries. He also performs regularly on a number of chamber series, including Chamber Soloists of Detroit, the Scarab Club, New Music Detroit, the Geneva Music Festival, and Manchester Summer Chamber Music.

Eliot was a double major at Oberlin College and Conservatory, earning degrees in History and in violin performance, the latter with Professor Marilyn McDonald. He later received his Master of Music degree from the Indiana University Jacobs School of Music, studying violin with Professor Kevork Mardirossian and completing an outside area specialty in jazz studies. When he’s not playing the violin, he enjoys reading, tennis, and spending time with his wife and their two cats. Eliot plays on a 2019 Joseph Curtin violin.

The YSO will perform with Eliot Heaton as soloist on Sunday, October 9 at 3:30 p.m. at Lincoln High School’s Performing Arts Center, 7425 Willis Road, Ypsilanti, MI, 48197. Tickets are $12 for adults, $6 for students/seniors/children, and $30/ per family, and can be purchased at the door or online at A2Tix.com.

The Ypsilanti Symphony Orchestra (YSO) is proud of its unique and significant cultural contribution to the Ypsilanti area. The YSO’s mission is “to share our passion for music through innovative programming, creative collaboration, and arts advocacy,” and to “actively contribute to the music appreciation and education of our musicians, organizational members and audience.” Led by Founder and Music Director Adam C. Riccinto, the Symphony marks its 24th anniversary with the 2022-23 season. More information about the Ypsilanti Symphony Orchestra can be found at www.ypsilantisymphony.org and on Facebook.