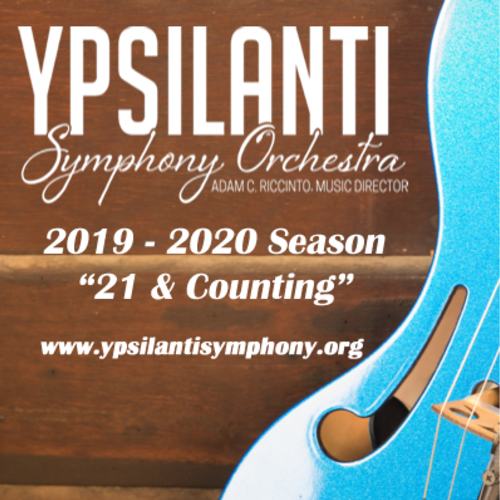 20th Anniversary Season “Sultan’s Holiday” Concert with Special Guests Washtenaw International High School (WIHI) Orchestra will feature Scheherazade by Rimsky-Korsakov, as well as ‘Twas the Night Before Christmas by Holcombe (narrated by Julie Morrison), A Christmas Festival by Anderson, Stille Nacht by Gruber/Davis/Custer, and A Charlie Brown Christmas by Guaraldi/Mendelsshon arranged by Pugh. The WIHI Orchestra will perform a program of selections from their fall semester and the concert will close with Sleigh Ride by Anderson performed by YSO and WIHI together.

YPSILANTI -- Music Director Adam C. Riccinto and the Ypsilanti Symphony Orchestra (YSO) continue their 21st Anniversary season with a “Sultan’s Holiday” concert at Towsley Auditorium/Washtenaw Community College on Sunday, December 15 at 3:30pm. The YSO is thrilled to perform with special guests the Washtenaw International High School (WIHI) Orchestra.. The Symphony will perform Scheherezade by Rimsky-Korsakov, followed by selected holiday favorites. Twas the Night Before Christmas by Holcombe will be narrated by Julie Morrison, new YSO Board Member and Executive Director of Institutional Effectiveness with Washtenaw Community College. Also on the program is A Christmas Festival by Anderson, Stille Nacht by Gruer, and A Charlie Brown Christmas by Guaraldi. The WIHI Orchestra will perform a program for strings and the concert will close with the Symphony and WIHI together performing Sleigh Ride by Anderson. YSO is pleased to welcome Beth Bashert, Mayor of Ypsilanti, as host of this concert.

In his masterpiece “Scheherezade”, Rimsky-Korsakov spins a musical tale based on One Thousand and One Nights. Written in 1888, we hear themes of the Sultan and his bride, Scheherezade, as she weaves her magical stories.

The Washtenaw International High School Music Program was created in 2011 by WIHI in conjunction with music teacher Brooke Pierson. Mr. Pierson teaches band, strings, and is Fine Arts Department Chair at WIHI and Middle Academy. Having taught throughout the state of Michigan, Mr. Pierson began his position at WIHI for the inaugural 2011-2012 school year. Mr. Pierson also has extensive experience as a conductor and composer. The YSO commissioned a piece by Mr. Pierson and performed this world premiere at the season’s opening concert.

The Ypsilanti Symphony Orchestra, or YSO, is proud of its unique and significant cultural contribution to the Ypsilanti area. The YSO’s mission is “to share our passion for music through innovative programming, creative collaboration, and arts advocacy,” and to “actively contribute to the music appreciation and education of our musicians, organizational members and audience.” Led by Founder and Music Director Adam C. Riccinto, the Symphony marks its 21st anniversary with the 2019-20 season.

YSO’s growth has been driven by its partnerships with regional organizations, strengthening community ties and offering diverse musical experiences to its audiences. In addition to the traditional concert season, YSO traditionally works to showcases and collaborate with local performing arts groups. YSO also performs its annual “Ypsi Pops” outdoor concert at Riverside Park in May. Sponsored by the Washtenaw County Parks and Recreation Association and the Bank of Ann Arbor, this very popular event draws over 500 residents and friends over Memorial Day weekend, to sit by the Huron River and kick off the summer with the music of its own community orchestra.

Other programming highlights of YSO’s 21st anniversary season include collaborations with members of Opera on Tap in February and electric violist Alexander Mishnaevski.