Songs of the Angels: A Concert to Lift the Soul

Songs of the Angels: A Concert to Lift the Soul 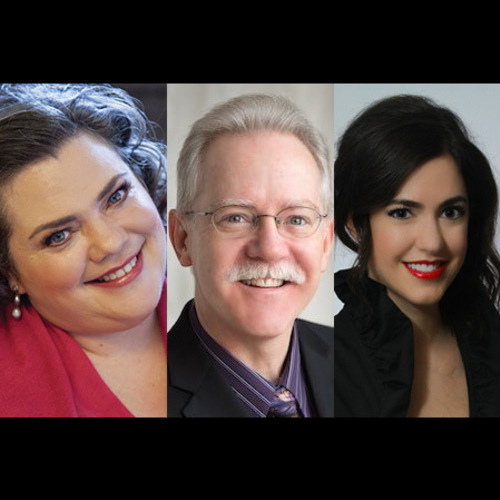 Join these artists for a program of heavenly duets from the sacred, spiritual, and operatic repertoire, including favorites like “Panis Angelicus” and the “Evening Prayer” from Hansel and Gretel.

Soprano Angela Theis has captivated the attention of audiences and critics alike, while remaining active in her hometown Detroit area. She is featured on the 2017 David DiChiera Letters &amp; Fantasies album and continues to be an ambassador for Michigan Opera Theatre and the music of its late founder. Angela was an original member of the Michigan Opera Theatre Studio, serving as the Soprano resident artist from 2015-2017. A perennial favorite of Michigan Opera Theatre, she has performed Barbarina in Le nozze di Figaro, Beth in Little Women, Frasquita in Carmen, Papagena (Pamina cover) in The Magic Flute, Laurie in The Tender Land, Yvette in The Passenger, the High Priestess in Aïda, and Marzelline in Fidelio.

Around the country, Angela has performed the roles of Susanna in Le nozze di Figaro with Toledo Opera, Adina in L’elisir d’amore and Mabel in Pirates of Penzance with Eugene Opera, Johanna in Sweeney Todd with Syracuse Opera, Clorinda in La Cenerentola and Frasquita in Carmen with Opera Roanoke, and Dew Fairy in Hansel and Gretel and Beth in Little Women with Utah Opera. In 2019, Angela made her solo debut at Carnegie Hall, and she has been a soloist with the South Bend Symphony Orchestra, Utah Symphony, and various professional ensembles in the Detroit area.

Angela has been honored with numerous grants and awards for her scholarship and singing in Italy and Austria, where she studied abroad and completed a postgraduate fellowship under Barbara Bonney at the Universität Mozarteum Salzburg. She won both the Audience Choice Award and 2nd Prize in the 2013 AIMS Meistersinger Competition in Austria, and she was a 2012 Michigan winner of the Metropolitan Opera National Council Auditions.

In her final year of her Master of Music at New England Conservatory, she was seen as Gretel in Hansel and Gretel and as Zerlina in Don Giovanni, for which the Boston Globe praised her &quot;bright, bold, and beguilingly sung&quot; performance. Angela holds a Bachelor of Business Administration with a double major in Marketing and Music from the University of Notre Dame. In 2019, Angela joined the faculty of Oakland University.

Diane Rae Schoff, Mezzo-Soprano, is a regular character on stage with regional companies throughout Michigan and around the country. Diane is thrilled to join Opera Grand Rapids for her third consecutive season in their 2019 production of The Mikado. Diane recently received high praise for her company and role debuts with Opera Carolina and Opera Grand Rapids as Marcellina in their joint production of Le Nozze di Figaro. Opera News said “It would be hard to imagine a better portrayal of Marcellina, both physically and vocally than that of Diane Schoff.” In the 2018/19 season, Diane had return engagements with Toledo Opera and Opera Grand Rapids as the Third Lady in Mozart’s The Magic Flute and also returned to Opera Carolina as the Duchess of Crackenthorpe in La Fille du Regiment and as Mme Larina in Eugene Onegin. Career highlights include her work with Michigan Opera Theatre as the second maid in Elektra 2014, Natalia Trotsky in Frida 2015, the Second Lady in The Magic Flute 2016 and as Aunt Cecilia in Little Women 2017; with Toledo Opera as the Old Baroness in their 2017 production of Vanessa where she earned where she earned acclaim for her “look that could drop a horse at 50 feet” (Toledo Blade). An avid performer of concert, oratorio, and classical works with orchestra, she recently sang the alto solos in cantatas 12 and 106 J.S. Bach and debuted with Orchestra Sono as the alto soloist in Haydn’s Lord Nelson Mass. Diane holds the honor of being a National Semifinalist in the Metropolitan Opera Competition, and is a graduate of the San Francisco Opera’s Merola apprentice program.

Timothy Cheek is a pianist/vocal coach and Associate Professor at the University of Michigan, where he serves as music director of Opera Workshop; teaches lyric diction classes; and is a coach for opera productions. He is also an Associate Faculty member of the university’s Center for Russian, East European, and Eurasian Studies; and teaches a Czech Vocal Literature course for singers and pianists.

Cheek holds a doctorate in Piano Accompanying and Chamber Music from the University of Michigan; and degrees in Piano Performance from the Oberlin Conservatory and the University of Texas at Austin. Cheek was awarded a Fulbright grant in 1990–91, studying as an opera coach at the Teatro Comunale in Florence, Italy under conductors Bruno Bartoletti, Gianandrea Gavazzeni, and Zubin Mehta.