Evening with Armenian Accent: Komitas at 150. The Story of a Musical Giant

Evening with Armenian Accent: Komitas at 150. The Story of a Musical Giant 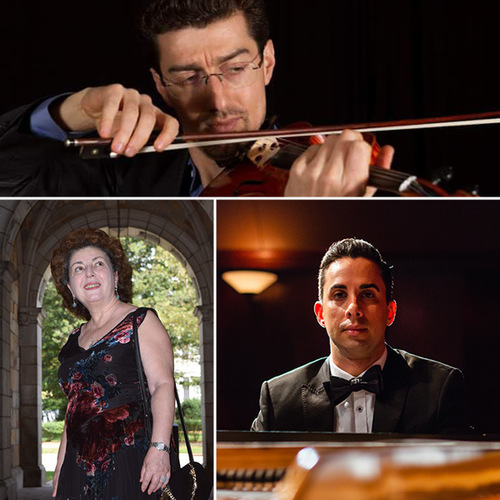 The concert is dedicated to the 150th anniversary of one of the giants of the Armenian music and one of the most prominent ethnomusicologists of all time, Komitas (nee Soghomon Soghomonian).

Komitas Vardapet (“Vardapet” is the Armenian word for a priest) was born in 1869 in Kutahia, Ottoman Empire, in a family of Armenians. Orphaned at an early age he was sent to Echmiadzin, the Holy See of Armenia, to receive education. As Armenian speech was banned under a severe punishment by the Turkish authorities in Kutahia, Komitas learned to speak his native language at the seminary and immersing himself in his culture and music soon became a prominent scholar, musician, choir director and composer whose life was wholly dedicated to saving the jewels of his musical culture and cleaning them from foreign elements that had permeated it throughout centuries. A highly educated man who spoke several languages (Armenian, Turkish, French, German among them) and studied music in Europe, he was respected by European musical authorities. Often called the “Savior of Armenian Music” he accomplished colossal work in a course of a decade or two, collecting over 3000 songs (more than half lost), organizing number of choirs which he directed, composing, arranging music, writing articles and meticulously detailed analysis of folk songs, and even partially decoding lost art of reading Medieval Armenian notation. It is, indeed, a hard task to find another ethnomusicologist who can match the volume of Komitas’ achievements completed in half a lifetime.

Komitas was arrested on April 24, 1915, along with 300 other Armenian intellectuals at the start of the systematic annihilation of Armenian and Assyrian ethnic minorities in Turkey, events which Raphael Lemkin later coined as “Genocide” and which took the lives of nearly 2 million people and displaced as many. Komitas was one of the few from the above-mentioned 300 to survive and return, after the intervention of Western powers (US Ambassador Henry Morgenthau) and some Turkish intellectuals, but he had suffered a severe case of nervous breakdown during the death march and spent the last twenty years of his life in seclusion in a hospital for mentally ill in Paris, France.

In 2019, when all Armenians in the world celebrate the 150th anniversary of the great musician, he is honored in his native country - schools, conservatories, avenues, musical groups are named after him, as well as by the international musical community, as one of the most significant ethnomusicologists in history whose work and life were cut short brutally but whose legacy lives and thrives moe than ever.

The concert presents works by Komitas, Khachaturian, Hovhaness, Baghdasarian and other Armenian composers. It focuses on the life and music of Komitas Vardapet, his influence, legacy and his importance in the international musical community.

The first half of the concert features Henrik Karapetyan (Violin) and Xavier Suarez (Piano) performing pieces by composers of Armenian origin whose work was in one way or another influenced by Komitas.

A special guest will present a small speech after the intermission.