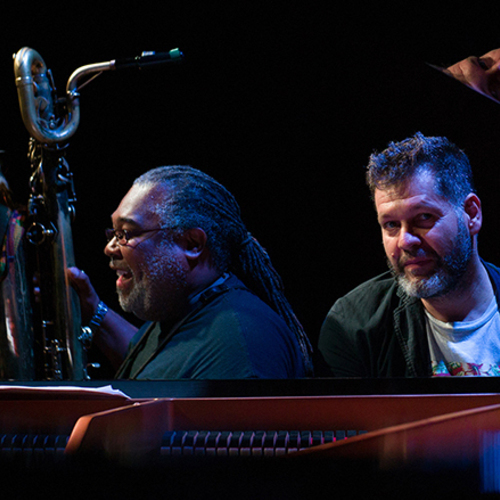 Ban and Harding, who come from very different backgrounds, have formed a personal and musical bond that stretches over twenty years. This close collaboration has yielded an amazing body of music featuring several different groups and producing five albums. Their duo features original compositions as well as interpretations of classics by composers such as Ellington and Monk.

Lucian Ban, raised in Cluj, Romania, is a NYC based pianist and composer working at the forefront of contemporary jazz, known for his amalgamations of Transylvanian folk with improvisation and explorations of the intersections of 20th Century European classical music with jazz. Since moving to New York City in 1999 he has worked with some of the city’s finest artists. His Enesco Re- Imagined 8tet co-lead with bassist John Hébert has re-envisioned the music of his fellow countryman, 20th century classical genius George Enescu through contemporary jazz.

Ban has composed original scores for dozens theater productions, for dance, for several movies and live scoring for films by Andy Warhol and Andrei Tarkovsky. His music for theater was nominated and won several awards.

Baritone saxophonist Alex Harding was born in Detroit, where he attended Northwestern High School, studying music under the direction of famed Ernest Rogers and also learned from Herbie Williams (who played with Charlie Parker) and Motown’s premier baritone player Beans Bowls. After graduation he studied with Yusef Lateef at the University of Massachusetts, eventually moving to New York, where he joined the Julius Hemphill Saxophone Sextet and began working with people such as Muhal Richard Abrams, Craig Harris, Lester Bowie, Frank Lacy, Hamiet Bluiett, Oliver Lake, the David Murray big band, and the Sun Ra Arkestra. The critics have hailed him as “the new voice on baritone saxophone, the carrier of the great legacy of Harry Carney, Pepper Adams and Hamiet Bluiett.” Harding has released several albums as a leader garnering glowing reviews and appeared as guest on more than 20 albums. Since relocating back to his native Detroit, he has been appearing often in many venues with different groups, most recently with his Organ Nation.