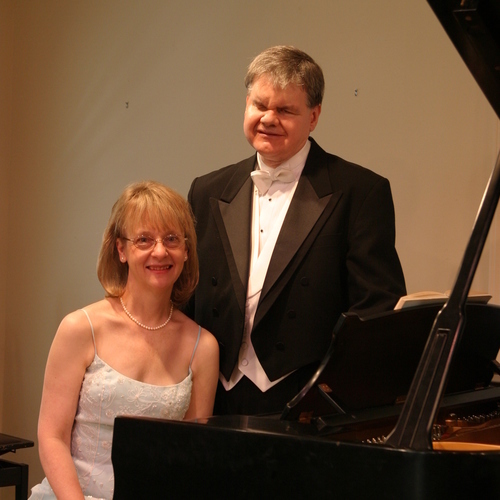 The Kerrytown Concert House would like to thank Roger Chard and Maurita Holland for over a quarter century of concert-giving, fundraising, and other behind-the-scenes work for the House.

Extraordinary instrumental and vocal music from friends Penny Fischer, Paul Fine, Bill Burnham and members of the UM's Life Sciences Orchestra (and yes, Roger and Maurita will perform, too)

If you are unable to attend, please consider making a donation to support the Kerrytown Concert House.

Paul Fine is an Associate Professor of Internal Medicine at the University of Michigan; he attended Harvard University and the University of Michigan Medical School. He has a primary care practice at the Taubman Center, supervises the care of hospitalized patients, and is very active in the education of medical students and internal medicine residents. He is the author of The Wards: An Introduction to Clinical Clerkships and The Rapid Access Guide to Internal Medicine.Paul was raised in Sylvania, Ohio and began playing the piano at the age of five. His first composition came the following year and was named “Let’s Go to the Bakery” by his first-grade class! He continued to compose and perform pieces in a variety of styles throughout his childhood and into college and medical school. Since 2006, working with Solid Sound Recording Company in Ann Arbor, he has released 13 CDs of original piano music, including Fine Tuning, Doctor’s Notes, and Conversation Pieces.

Penelope Fischer is a professional flutist & educator. Penny is principal flutist emeritus of the Ann Arbor Symphony Orchestra and performing member of Detroit Chamber Winds and Strings. She has taught flute at several universities including UM, EMU and Interlochen and can be heard on the Naxos, CRI, Crystal and Koch labels. She has performed in China, Russia, throughout Europe and the US. She is a past president and chair of the National Flute Association from which she received the 2015 Distinguished Service Award, She co-founded the Community Music School of Ann Arbor, is President of Ann Arbor’s Society for Musical Arts, and director of Arbor Flutes. A native of Mason City, Iowa, Penny has a BM from Iowa, MM cum laude from Michigan, and Doctor of Musical Arts from Maryland.

Baritone Roger Chard has been a frequent vocal soloist with Maurita Holland in Ann Arbor, throughout Michigan, and northern Ohio. They also have performed in other states, the National Archives in Washington D.C., and on the National Geographic Explorer, while traveling to Antarctica. Mr. Chard soloed frequently with the Ann Arbor Cantata Singers for fifteen years, including two Hill Auditorium appearances with Dave Brubeck and various, prominent oratorio roles. He has soloed with the American Wind Symphony Orchestra and with orchestras and choruses from Ann Arbor, Toledo, Grand Rapids, Holland, and Flint. He studied with Thelma Lewis and Professor John McCollum of the University of Michigan and Professor Loren Jones of Michigan State University. He has sung in master classes with highly acclaimed accompanist and vocal coach John Wustman and with world-renowned contralto and former head of Canada's Council of the Arts, Maureen Forrester. He also studied piano for twelve years and French horn for seven.

Roger is a graduate of the Michigan School for the Blind and Lansing Sexton High School, Michigan State University, and the University of Michigan Law School. He practiced law in Ann Arbor for nearly forty years, including his partnership in the Ann Arbor law firm of Chard &amp; Lloyd where he concentrated on real estate law. He also practiced law for ten years with the four county Legal Services of Southeastern Michigan, serving as its executive director for five years. He is a member of the Washtenaw County Bar, its Real Property Section, the State Bar of Michigan, its Real Property Section, the American Blind Lawyers Association, and the Rotary Club of Manistique. He serves currently or has served on the Boards of Directors for the Ann Arbor Cantata Singers, Ars Musica, Kerrytown Concert House, Wild Swan Theater, Ann Arbor Center for Independent Living, Michigan School for the Blind, Ann Arbor School for the Performing Arts, Real Property Advisory Board for the Institute of Continuing Legal Education, and the Michigan Braille Transcribing Fund. He has been a lecturer and author on real estate law, including The Law of Summary Proceedings to Recover Possession of Real Property, Buying and Selling a Home, and The Law of Damages; and he is a co-author of the book, Lease Drafting and Landlord Tenant Law in Michigan. Mr. Chard is an avid down hill skier and was named athlete of the year in 2004 by the National Sports Center for the Disabled in Winter Park, Colorado.

Maurita Peterson Holland grew up in Gulliver, MI. After graduating from Manistique High School, she attended the University of Michigan where she studied music, computing, and information science. Maurita is a University of Michigan Associate Professor Emerita of Information, having taught courses in the design and management of information systems and services, served as Assistant to the Dean for Academic Initiatives, and worked with cultural heritage preservation information systems in Native American tribal colleges and the Smithsonian. After retiring, she continued her teaching and interest in K-12 curriculum development in the UM’s School of Education and School of Information.

Maurita began playing piano at age four. She spent several summers at Interlochen’s National Music Camp. Maurita has accompanied the Ann Arbor Cantata Singers and has been a frequent piano accompanist and performer in the Ann Arbor area. She earned Bachelor of Music and Master of Arts degrees from the University of Michigan where she studied piano with Robert Hord and also pursued doctoral work in musicology. Maurita has played flute with the Ann Arbor Adult Flute Ensemble. As an active member of the Detroit-area Swedish community, Maurita often plays Scandinavian music on her accordion. She was the first woman on the board of the American Society for Engineering Education and has served on the boards of the University of Michigan Press, Michigan's Institute of Continuing Legal Education Technology Committee, Board of Trustees of the Emerson and Greenhills Schools, and of the Board of Trustees of the Community Systems Foundation. She has been a governor of the Martha Cook Building of the University of Michigan and president of the Rotary Club of Ann Arbor. She is currently the chair of the board of The Stewardship Network, a regional environmental non- profit, is a founding member of Washtenaw Citizens for Ecological Balance, and belongs to the Rotary Club of Manistique.

Maurita spends as much time as possible at her Lake Michigan home in Gulliver. She is an Advanced Master Gardener and grew orchids for many years.

Maurita and Roger have taken to the Kerrytown Concert House stage approximately one hundred times and regard it as their musical home.