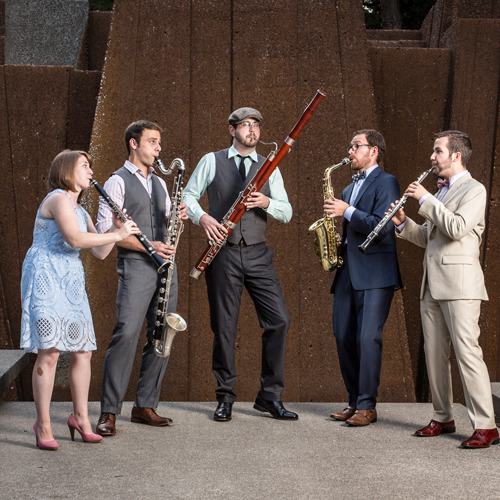 The 7-time national prize-winning and Ann Arbor-based Akropolis Reed Quintet celebrates its 10th anniversary with a special program featuring the world premiere of Sprocket, a new work composed by Steven Snowden for the quintet and a rideable percussion bicycle designed and built by Detroit metal artist, Juan Martinez.

With support from the National Endowment for the Arts, High Wire Lab, and the Paul M. Angell Family Foundation, this groundbreaking composition celebrates Ann Arbor and Detroit's cycling cultures and the industrial heritage of our region.

The culminating concert of their annual Together We Sound festival, the 7-time national prize-winning, Ann Arbor-based Akropolis Reed Quintet presents a special program featuring the world premiere of Sprocket, a new work by Steven Snowden for reed quintet and a rideable percussion bicycle designed and built by Detroit metal artist and Kresge Arts fellow, Juan Martinez. The bicycle creates unexpected and imaginative sounds including an accordion and an automated bell set powered by gears attached to the bicycle's pedals, and more. Featuring percussionist Zac Brunell who will also perform an additional work by Steven Snowden for amplified cactus, the program also includes the music of recent American Academy of Arts and Letters Music Award recipient, Stacy Garrop.

Post concert meet-and-greet including a chance to play Martinez's percussion bicycle yourself!

This concert is generously supported by the National Endowment for the Arts, Michigan Council for Arts and Cultural Affairs, High Wire Lab, and the Paul M. Angell Family Foundation.

The Akropolis Reed Quintet was founded in 2009 at the University of Michigan and is the first ever ensemble of its makeup to win a Fischoff Gold Medal (2014), Grand Prize at the Plowman and MTNA national competitions, and 6 national chamber music prizes in total. Hailed by Fanfare for its “imagination, infallible musicality, and huge vitality,” Akropolis has performed from Juneau to Abu Dhabi and has won juried showcases at six national conferences, including as a participant in APAP’s prestigious Young Performers Career Advancement Program (YPCA). Winner of the 2015 Fischoff Educator Award, Akropolis is a nonprofit conducting extensive educational residencies and impacting thousands of children each year. Winner of a coveted 2018 Chamber Music America Commissioning Grant, Akropolis has premiered more than 50 reed quintet works and recorded three albums, including its 2017 release, The Space Between Us, which the San Francisco Chronicle calls, “pure gold.” Akropolis has received additional grants from the National Endowment for the Arts, Michigan Council for Arts and Cultural Affairs, CultureSource, Paul M. Angell Family Foundation, Aaron Copland Fund for Music, Chamber Music America, Alice M. Ditson Fund, Amphion Foundation, High Wire Lab, and Quicken Loans.

Steven Snowden has been described as “Beguiling… combining force with clarity” (San Francisco Classical Voice), “Wonderfully dynamic” (Interlude Hong Kong), “Rustic, red-blooded” (New Music Box), “Marvelously evocative”, (Cleveland Plain Dealer), and “The most wildly intriguing sight and sound I have experienced at a concert” (The Boston Musical Intelligencer). Writing music for dance, theater, multi-media installations, and the concert stage, his work often deals with concepts of memory, nostalgia, and the cyclic nature of historical events as they pertain to modern society. While his musical influences are deeply rooted in bluegrass, folk, and rock, he utilizes non-traditional techniques and processes to compose works that don’t squarely align with any single genre or style.

A native of the Ozarks countryside, he began studies in music composition in 2002 and received degrees from Missouri State University, University of Colorado at Boulder, and University of Texas at Austin. In 2012-2013 he was a Fulbright Scholar in Portugal, researching the implementation of motion tracking technology as a means to facilitate collaboration between music and dance. In 2013-2014, he was a visiting professor and composer in residence at the Hong Kong University of Science and Technology and is the co-founder/director of the Fast Forward Austin Music Festival. He currently works as a freelance composer in Boston and is on an eternal quest to make the perfect breakfast taco.

Juan Martinez is a Detroit metal artist who creates fantastical, functional creations. Juan creates sculptures that live and work among us, drawing from his experience as a science illustrator and a fabricator working with metal, wood, and other materials. His work has been exhibited at Art Basel Miami, Museum of Contemporary Art Detroit, and in public and community spaces in Detroit, Los Angeles, and beyond. Juan’s artistic practice is informed by his commitment to community, with an emphasis on empowering and equipping Detroit youth for extraordinary futures. He is a co-founder of the Beehive Design Collective and the Austin Bike Zoo.

More information about the world premiere of Sprocket can be found here on Akropolis' website.