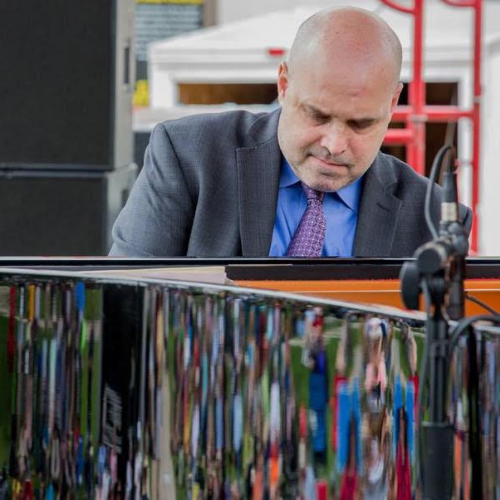 Originally from Toledo, Ohio and now based in New York City, Larry Fuller is an internationally acclaimed jazz pianist, band leader, and clinician who is known by critics and fans to "swing like a beast!”.

Since 2013 - harnessing his extraordinary experience - Fuller has led the Larry Fuller Trio. He presents a musical program rarely experienced live today, consistently praised for his emotive, swinging style, monster technique, and program versatility. From bop, to stride, to swing, to blues - Fuller’s show at Kerrytown Concert House is one you will not want to miss!

George is active nationally as a bandleader and educator for programs including Jazz at Lincoln Center’s Jazz for Young People, Christian Howes’ Creative Strings Workshop, and Keith Hall's Summer Drum Intensive. He is the director of the Midwestern arts initiative Appalachian Muse. George’s self-titled debut recording was released in 2016 to critical acclaim.

Jason Tiemann is a New York City based jazz drummer and educator. Drawing influence from the great(s) Philly Joe Jones, Tony Williams, Elvin Jones and Billy Higgins, Tiemann is quickly forging his musical voice on the New York scene by fusing his depth of historical foundation with crisp technique and propulsive, intuitive swing. Before moving to NYC, Tiemann was Professor of Jazz Drums and Percussion at University of Louisville for 12 years. He was also active on the Midwest Jazz circuit, in constant demand throughout the region as an educator and performer accompanying numerous jazz luminaries. Since 1998, Tiemann has been an artist/clinician for the Jamey Aebersold Summer Jazz Workshop.

Tiemann has performed and/or recorded with an astonishing array of musicians including Benny Golson, David Liebman, Harold Mabern, Eric Alexander, Mike LeDonne, Peter Bernstein, Slide Hampton and countless others. He is an endorsing artist for Yamaha drums, Evans drumheads, and Innovative Percussion sticks, mallets and brushes.